Re Ka Ta is a trendy beach bar and restaurant in Phuket, part of the excellent and also brand new Boathouse in Kata Beach. If you are familiar with this part of Kata, you know that despite such great location right on the beach, this place saw many restaurants and not many successes. First it was a seafood restaurant called Goong, followed by another trendy but short lived restaurant called Oasis. Will Re Ka Ta succeed where the other didn’t? That is still to be seen

Re Ka Ta name sounds similar to the world famous Ku De Ta in Bali for a very good reason, it was designed by the same person. But that’s probably the only similarity.

Re Ka Ta is a trendy and colorful bar but also a restaurant so we originally went there for dinner. Unfortunately that night it happened to be a buffet and we are not big fans of this concept a romantic dinning, except for brunches. So we decided to just go for a couple of drinks then move to the Boathouse for dinner, as both are connected and part of the same property.

The outdoor setting is very pleasant with an entrance terrace leading to different levels all fitted with lots of comfortable sitting, and even a small pool reflecting the colors of sunset when weather permits. The restaurant itself is partly indoor with air-con, which might not be a bad idea since the place tend to be hot with the amount of lighting and the location tucked between hills. Most tempting is of course the tables right by the beach with great views on the sunset and the small nearby island.

The whole place is lit with fancy changing colors and the music played by a DJ was good but a bit loud to our taste. I guess they are trying to recreate a bit of this club mood that made KuDeTa in Bali so famous.

Price are as you can expect a lot higher than in your average bar, but the wine list is certainly a lot nicer too since it comes directly from the Boathouse. 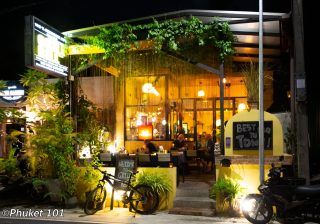 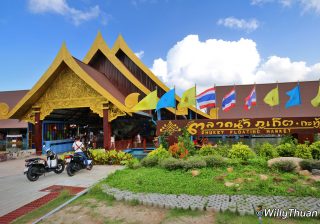 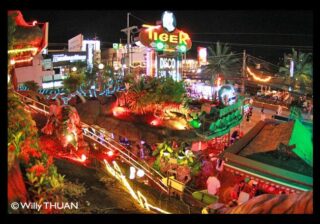