Phang Nga Road is another historical street that runs parallel to the famous Thalang Road, in Old Phuket Town. Phang Nga Road maybe is less known, but it has a lot of charms, a few local restaurants, and several important historical landmarks and museums. As you walk around, take the time to look at the superbly renovated architecture.

What to see and do on Phang Nga Road

Shrine of the Serene Light

The Shrine of the Serene Light (Sang Tham Shrine) used to be ‘the little hidden Chinese temple’ tucked away right under your nose on Phang Nga road, one of the most famous streets of Phuket Town. While most Thais knew all about it, only a few foreigners would be aware of its existence and proudly whisper its secret location to newbies like an old secret passage to some mystic temple.

The old Kasikorn bank on Phang Nga Road got a massive facelift and has since become a selfie favourite.

The Phuket Amulet Market is a hidden alley connecting Phang Nga Road to Ratsada Road. It has been opened for more than 25 years (when I first arrived) and is still very popular with collectors. These amulets are usually blessed by monks and have special powers; some will protect you or bring you luck. Depending on their age and rarity, amulets can be extremely expensive.

The Baba Museum or Peranakannitat Museum is inside the yellow old ‘Standard Chartered Bank’, at the intersection of Phang Nga Road and Phuket Road. It’s a rather modest museum modest, but the location and the Sino-Portuguese building itself are worth a photo.

Museum Phuket is another well-known landmark of Phuket for its clock tower standing high above the main building. Not so long ago, this building was white and neglected, somewhat anonymous if it was not for the clock that was sometimes working, sometimes not. We’ll review the museum shortly.

Where to Eat on Phang Nga Road?

Tu Kab Khao was always a beautiful heritage building. It hosted boutiques and restaurants in the past, but success only arrived with the opening of Tu Kab Khao, an excellent restaurant serving southern specialities

Surf and Turf by Soul Kitchen

Surf & Turf by Soul Kitchen is a small and excellent restaurant on Phang Nga Road in Phuket Town that received a Bib Gourmand in Michelin Guide.

Where to stay on Phang Nga Road

The Memory at On On Hotel

The Memory at On On Hotel is a beautifully renovated but affordable hotel with a fun history. Forty years ago, it was just a run-down cheap hostel for many years, and while it had some ‘character’, people didn’ really look at it twice: there were better places to stay.

The movie ‘The Beach’ came along, and a scene at the beginning of the movie was shot inside On On Hotel. It was a little exaggerated (I never saw anyone washing the walls), but it wasn’t far from what On On looked at the time. It was also proportionally cheap, with rooms starting at 180 baht, and luxury rooms at 350 baht, with private bathroom!

South Wind is one of the oldest second-hand book shops on the island. It used to be very popular, but as you can expect, paperback books are not as sought after as they use to be a decade ago.

Phuket Town – A Walking Guide to Old ...
Our Old Phuket Town and Old Street Walking Guide will save you time and effort! The historical part of Phuket is not huge but is rich and exciting enough to explore in half a day ... Read More 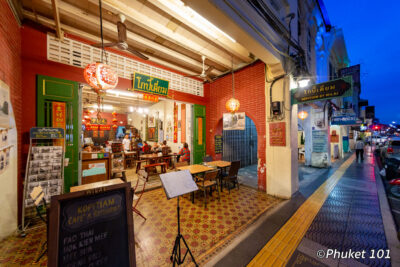 Thalang Road in Old Phuket Town – A W...
Thalang Road is the most famous street in the historic part of Old Phuket Town. The municipality and owners managed to revive most of the old Sino-Portuguese shophouses and bury the ugly cables Thailand is so famous for ... Read More

Soi Romanee in Phuket Town
Soi Romanee, in the historical centre of old Phuket town, is a short street with a long and colourful history. Today it is home to souvenir shops, fancy ice cream parlours and small but posh guesthouses ... Read More 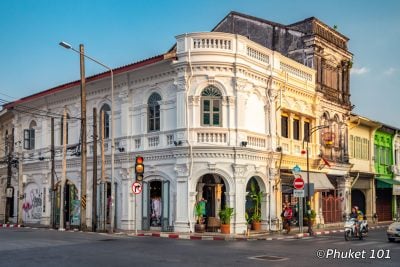 Dibuk Road in Phuket Town – a Walking...
Dibuk Road is one of the famous old streets of Phuket town you should add to your list while exploring. It's very colourful and easy to find, with plenty of casual cafes, shops and restaurants to enjoy ... Read More 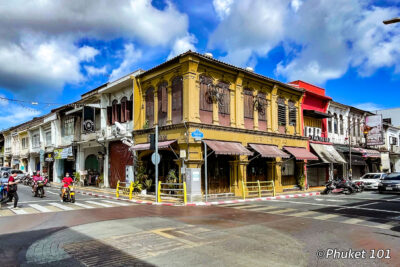