What is the Phuket Vegetarian Festival 2022?

The Phuket Vegetarian Festival (or Nine Emperor Gods Festival) happens once a year, during the ninth lunar month, and is one of the most auspicious events on Phuket island. For this unique occasion, a crowd of devotees assemble in every Chinese shrine around the island, followed by an even bigger horde of photographers avid to get the shot of their life. The Vegetarian Festival is an internationally known event, and while it also happens modestly in Bangkok around the same dates, it is mostly a Phuket event.

Weeks before the Vegetarian Festival events, yellow Chinese flags bloom on every roadside and intersection, especially near Chinese temples. Stages, decorations and parade accessories gather near shrines, and hundreds of food stands are erected nearby. The whole event is usually heavily sponsored.

For several days, on both sides of Phuket Town streets leading to shrines, food stands display tons of vegetarian dishes in all imaginable shapes and sizes (but often have a very similar taste). Once, we even saw a full collection of fake sushi, all made of rice and tofu! See at the end of the page to read about a few popular dishes. The irony is that real vegetables are hard to find: you mostly will find noodles, deep-fried stuff, and tofu shaped like meat, but no vegetables.

Note that most non-vegetarian restaurants in Phuket Town will close for a week, but the restaurants in all beach resorts will operate normally, so don’t worry too much.

It is to be seen once in your life, but it attracts a crowd of photographers who want their share of weird photos to take back home with such eerie views. So from early morning, worshipers will enter a trance at their favourite shrine and pierce their cheek with the most extreme object possible: from a gas nozzle to a scale warship model or a car shock absorber.

Anything goes; the weirder, the better. The procession will then start, leading the devotees from one shrine to another. Along the way, local Thai of Chinese descent prepare food offerings on small tables and receive blessings.

When the main festival starts, a crowd of worshipers, all dressed in white or yellow, gather at Jui Tui Shrine in Phuket Town for the first event marking the ceremony’s opening: a giant bamboo pole rising to invite divinities to come down to earth. The devotees wear bright and very ornamented outfits, and then you are set for a full week of firecrackers, parades, piercings, and vegetarian food.

Each day of the Phuket Vegetarian Festival, processions start from one of the leading shrines around Phuket island. Thousands of people will pay respect to their ancestors. During this week, everyone follows ten principles, mostly wear white, do not eat meat, drink alcohol, do not have sexual activities, etc.

The purpose of the Phuket Vegetarian Festival, which seems to originate in 1800, seems to differ from the Chinese event in several South-East Asia countries. The worshipers will follow the ten principles mentioned above to cleanse their spirits. At the same time, the devotees will go in procession, self-inflicting all kinds of tortures to shift other worshipers’ evil onto themselves to bring luck back to the community. 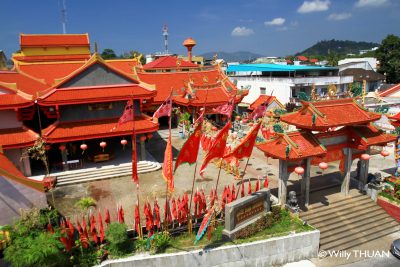 Jui Tui Shrine in Phuket Town (Kew Ong) ⛩️
Jui Tui Shrine (Kew Ong) is one of the oldest and most important on Phuket Island. It plays a significant role during the famous Phuket Vegetarian Festival, usually held in October and November. The festival dates use the Lunar Calendar, and the festival's exact dates change every year, so if you plan to travel to ... Read More 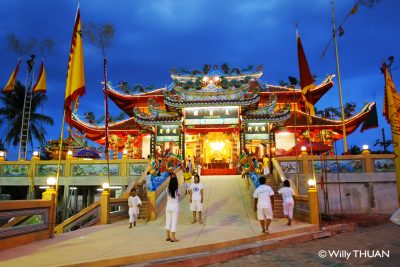 Tha Rua Shrine ⛩️
Tha Rua Shrine is one of the oldest Chinese shrines in Phuket, found in Thalang District on Thepkasattri Road about 800m south of the Heroines’ Monument. It’s an important site during the annual Phuket Vegetarian Festival, when thousands of devotees come to hold ceremonies and eat vegetarian food during the event’s nine days. Tha Rua ... Read More 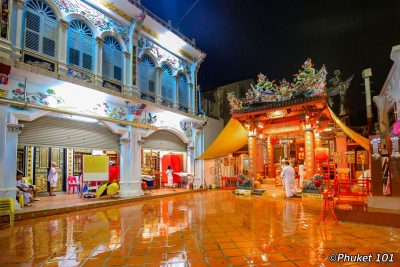 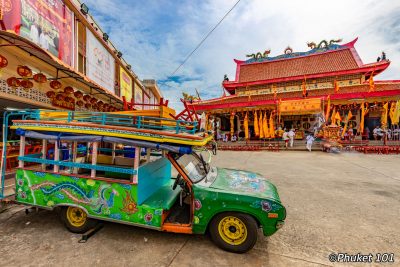 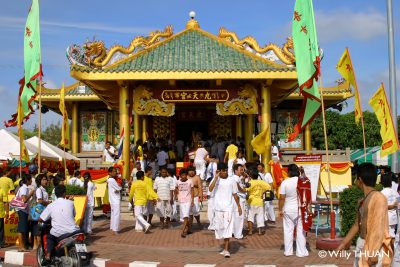 Kio Thian Keng Saphan Hin Shrine ⛩️
Kio Thian Keng Shrine is a colourful Chinese shrine that is set on the seashore inside Saphan Hin public park in Phuket Town. It’s a place of worship for the local Chinese-Thai community and it plays an important role as the site of the final farewell to the gods during the annual Phuket Vegetarian Festival ... Read More 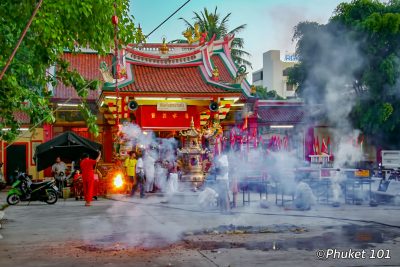 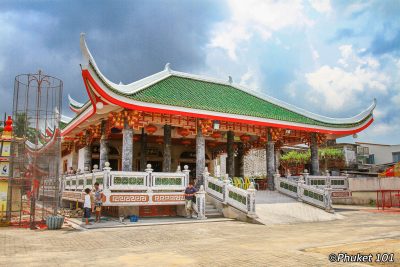 Lai Thu Tao Bo Keng Shrine in Kathu ⛩️
Lai Thu Tao Bo Keng is one of the oldest Chinese shrines in Phuket, and many believe it was the birthplace of the Phuket Vegetarian Festival nearly two centuries ago. The shrine is located in the subdistrict of Kathu in the island’s interior, between Phuket Town and Patong Beach. Though it’s not well known as ... Read More 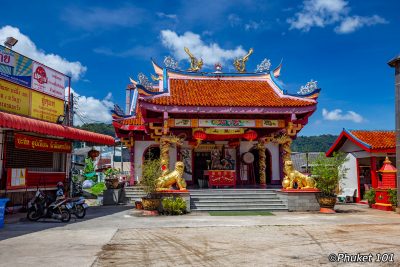 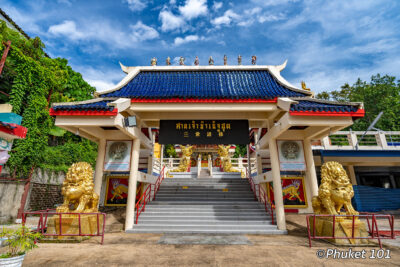 We post the unavoidable piercing photos everyone has already seen or shot themselves here. Those photos are easy to take, follow and enjoy the parade. We won’t even spare you the gross ‘tongue sliding on a giant blade’. Pictures of the firecracker parade are more challenging, with a tremendous amount of suffocating smoke and loud noise.

The ‘walk on the fire’ is another challenging photo to capture, as you must come early to secure the best spot. Get ready to wait and feel the heat for an hour or so: you have to save a place near the burning charcoal early not to have anyone in front of you, which means sweating for at least an hour. Second: the ‘walking’ is more of a jump as fast as you can above the charcoal, so with the lack of light, taking sharp images is difficult, so get ready to freeze the moment with a well-calibrated flash (too much flash would kill the atmosphere).

Where to stay to see the event

The best place to book a hotel for the Phuket Vegetarian Festival and be near one of the parades would be one of the heritage hotels in Phuket town. Not all those hotels are historical, but they have a style that fits the event atmosphere. The Memory at On On Hotel is a real heritage, and a few small guesthouses built on those old Sino Portuguese shophouses are too. These are in the old streets, not expensive, renovated recently but small and bare. Anyway, Phuket is a small island, so wherever your hotel is, you are not far from the old streets where the procession looks the best.

Ten vegetarian food to try during the festival

▷ Mee Pad Jay (หมี่ผัดเจ) fried flat rice noodles or round egg yellow noodles with kale, one of the most popular vegetarian dishes during the festival.

▷ Yen Ta Fo (เย็นตาโฟเ) is a pink-coloured soup with noodles served in a broth seasoned with fermented and pungent red bean curd. This dish comes with chicken or pork for the rest of the year.

▷ Khao Mok Kai (ข้าวหมกไก่เจ) A dish that looks like chicken rice, but the chicken is replaced with tofu 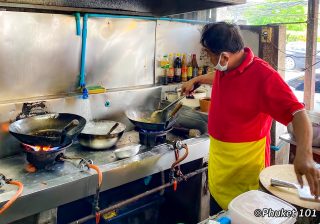 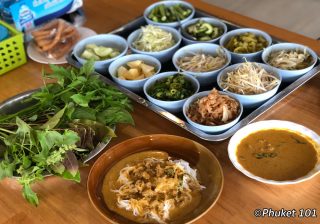 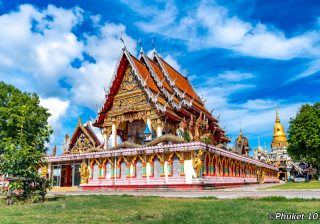