Lim Hu Tai Su is a Chinese Taoist shrine on the north side of Phuket Town, also known as Sam Kong Shrine for the neighbourhood it’s found in. Though not as well known by visitors as larger Chinese shrines like Jui Tui Shrine in Phuket’s Old Town area, Sam Kong Shrine is a revered place of worship for the local community. It’s become a key part of the Phuket Vegetarian Festival when it hosts several ceremonies and a procession during the annual 9-day event.

Lim Hu Tai Su temple is more than a century old, first set up with land donated by a prominent Chinese-Thai family. Its presence grew following renovations in the late 1940s and again in the mid-1990s.

The temple’s main building changed over the century from a modest thatch-roof structure to being highly ornate, with large serpentine dragon sculptures wrapped around its front columns and extending across the top of its tiled roof. It’s easy to spot the temple from the street as you pass by, with its equally elaborate archway at the entrance.

Inside the shrine, there are statues and images of several Chinese gods, including the deity Lim Hu Tai Su, for which the temple is named. It’s believed that Lim Hu Tai Su had the power to cure illnesses, and it’s not uncommon for people to bring their Chinese medicines to the temple to have them given magical healing properties. There were once some sacred texts at the temple that described Lim Hu Tai Su’s healing techniques, but these have now been lost.

Lim Hu Tai Su Shrine offers a good insight into the strong influence of Hokkien Chinese culture in Phuket. Many Phuket people are descendants of Chinese immigrants who arrived in large numbers in the 1800s and early 1900s to work in the island’s thriving tin mine industry and set up related merchant businesses.

Phuket Town grew a lot over those years, and many of the Sino-Portuguese shophouses and shrines built during the heady tin-mining days still stand today. The Phuket Vegetarian Festival has been around since the early 1800s, but it really started to grow in size and stature (and shock value!) in the 1990s.

That’s when Lim Hu Tai Su Shrine became integrated into the festival after its restoration and when the caretaker at the time summoned ‘holy fire’ from China. Before that, the worship of Lim Hu Tai Su was based at Bang Neaw Shrine.

The temple is open to the public all day, though to see it in its full glory, it’s best to go during a festival or ceremony after dark when the amber lighting and incense smoke add an aura of mystery to the colourful temple scene. During Phuket Vegetarian Festival, it’s likely to be packed with white-clad worshippers. The temple grounds and surrounding streets transform into a lively bazaar with loads of vegetarian food for sale.

Lim Hu Tai Su Shrine is located some distance from the busy Old Town area, and there’s not much else of historical interest to see in the immediate area. It’s a non-touristy part of town for sure. The street is lined with local food shops, a school, and businesses catering to the local community like a hair salon and flower shop.

Just a 5 minute walk away is the popular Chillva Market. The large Lotus’s (formerly Tesco’s) hypermarket is just a bit further down the road, so you could do some shopping and market browsing after visiting the temple. It might be wise to park at the Lotus’s or Chillva and walk to the temple if visiting during the Vegetarian Festival, as parking at the shrine would be impossible during those days. 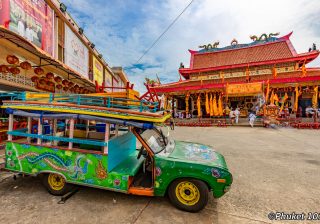 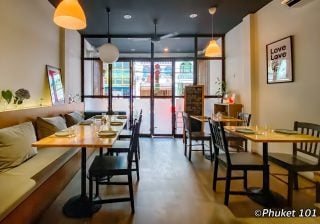 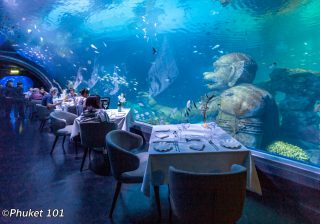