A significant Shrine in Phuket Town

Hok Nguan Kong Shrine is a Chinese temple found near the Surin Clock Circle in Phuket Town. It was founded more than 80 years ago by the Chinese-Thai community in Phuket. From the 1800s well into the 20th century, thousands of migrants from China arrived in Phuket to work in the tin mines and establish merchant businesses. Though many migrants settled in Phuket and integrated with the local Thai community, they held onto some Chinese traditions that have been passed down through the generations.

Hok Nguan Kong Shrine is just one example of the lasting influence of Chinese migration on the local culture – look around Phuket Town and you’ll find several more including Bang Neow Shrine, Jui Tui Shrine and Sang Tham Shrine (or Shrine of the Serene Light).

The most important sacred object in the shrine is a black sandalwood statue of the Ju Su Kong deity. Ju Su Kong was born more than 800 years ago during the Song Dynasty. He was ordained as a Buddhist priest who became known for his commitment to community service and dedication to improving public transport networks like roads and bridges. After his death, his devoted followers honoured him as a deity.

Hok Nguan Kong Shrine is found about halfway between the Old Town area of Phuket and Saphan Hin public park opposite the Metropole Hotel. The area attracts many locals who come to eat at the tasty and cheap restaurants nearby including the long-running Mee Ton Poe restaurant, famous for its Hokkien noodle dishes.

The shrine’s location shows the diversity of Phuket, as it’s found a short distance away from a Catholic church, the Yameay Mosque, and a few Thai Buddhist temples including Wat Thawon Khunaram. A larger Chinese shrine, Bang Neow Shrine, is found about 500 metres down the road from this shrine.

Entry to the shrine is free, but donations to help with its upkeep are welcome. On most days the temple is quiet, though on Chinese holidays like the Lunar New Year and the Phuket Vegetarian Festival it will be much busier. 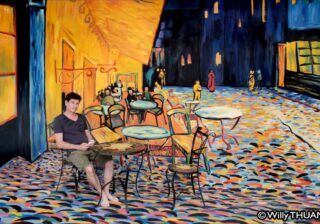 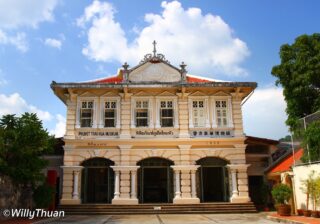 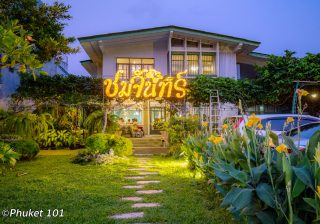 Chom Chan by One Chun Restaurant in Phuket Town