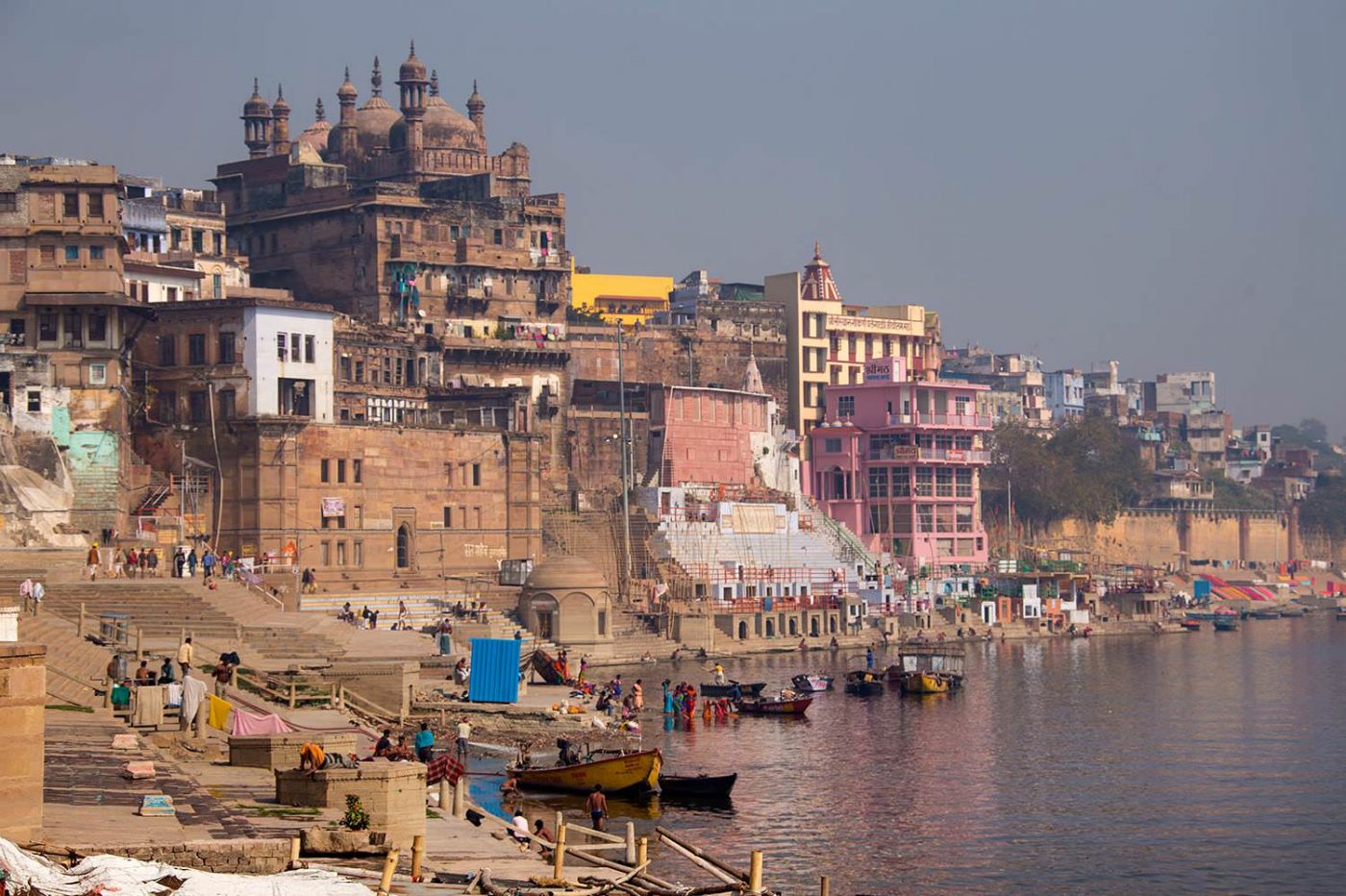 Varanasi is the most amazing city I had the chance to visit in a lifetime of many travels, and once you’ve seen it, it’s not difficult to realize what makes it so unique. In a world of globalisation, where all the big cities start to look identical, Varanasi was a shocking discovery. Yes, such magic places still exist, but not every traveller will enjoy its boldness. In many aspects, Varanasi is dirty, smelly, crowded with the permanent honking of traffic jams, but it is a world on its own. Varanasi is a timeless city like no other. Varanasi, which used to be called Benares, is the main city of Uttar Pradesh dating to the 11th century B.C! 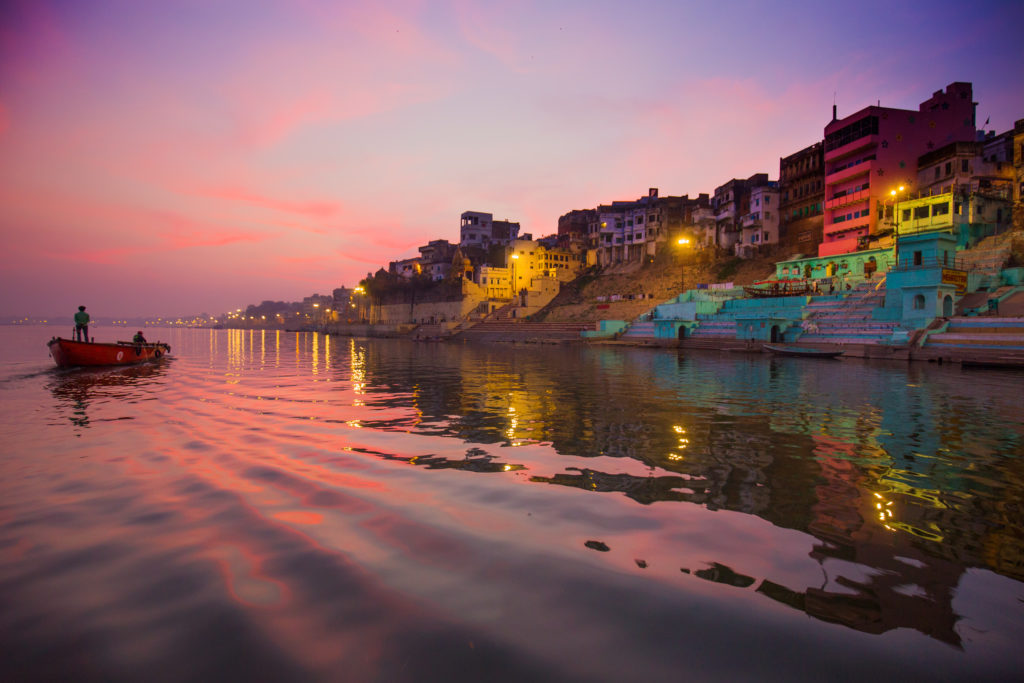 I went to Varanasi twice in the past 2 years. The first time was the most powerful blast I had in decades of travelling. I do travel around the world a lot, but India was never on my priority list. I often talked about it, but somehow my vision was biased by documentaries seen on TV programs, or based on how people around me described it. 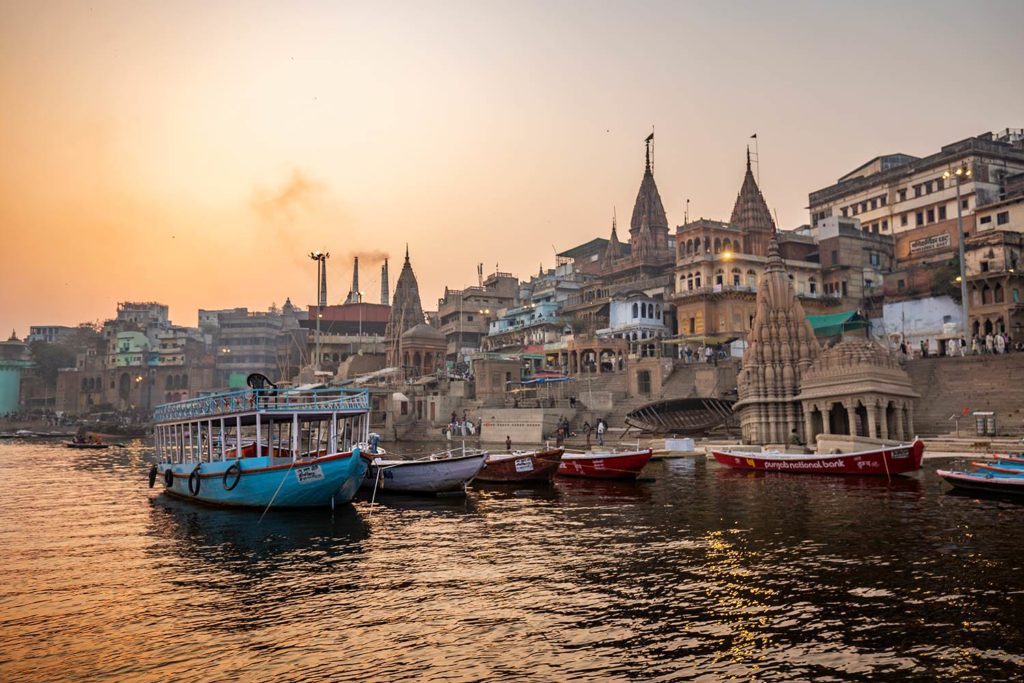 Even when though I crossed Sahara and travelled in sub-Sahara countries, I must admit that India always appeared a little scary. I was under the impression that when walking alone in India, I would always be surrounded by beggars and snatchers. In addition, I would have to witness the unbearable poverty. But to my surprise, it never happened. I was never approached or disturbed, I never felt threatened at any time. I was always comfortable walking alone with all my photo equipment. 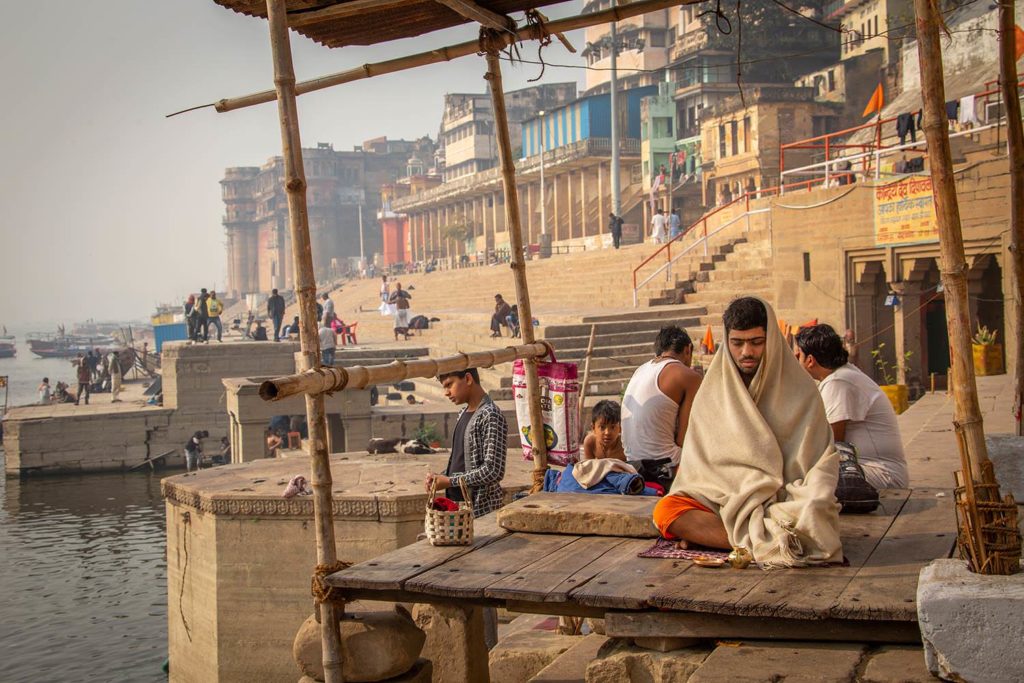 How it all started

I joined a group of friends whose purpose was to visit several important sites related to the enlightenment of Lord Buddha. I may not be Buddhist, but I realised the unique chance that was given to me to see places that mean so much to so many Buddhists. So I embarked on this long journey and visited all the significant Buddhist landmarks. Then while my friends spent long hours in teachings and meditation, I walked alone by the Ganges river. 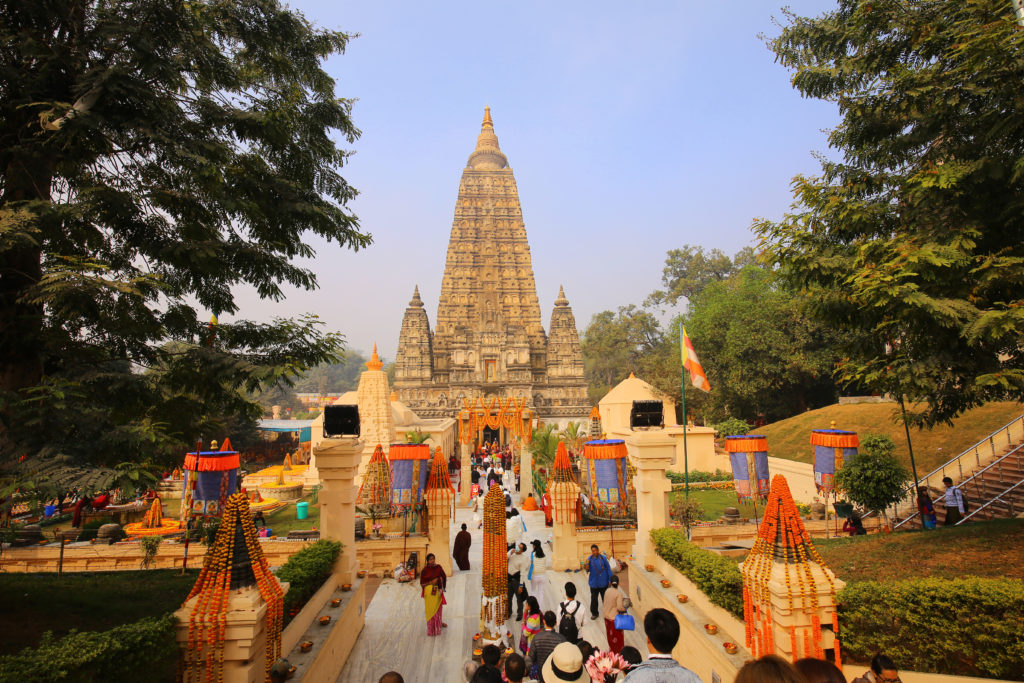 It was an instant revelation. I wasn’t prepared for the incredible visual feast Varanasi had to offer, and yet being so modest and discreet about it. The architecture, the intricate city layout, the buzzing life and mostly the explosion of colours at every corner was an instant rush of adrenaline. 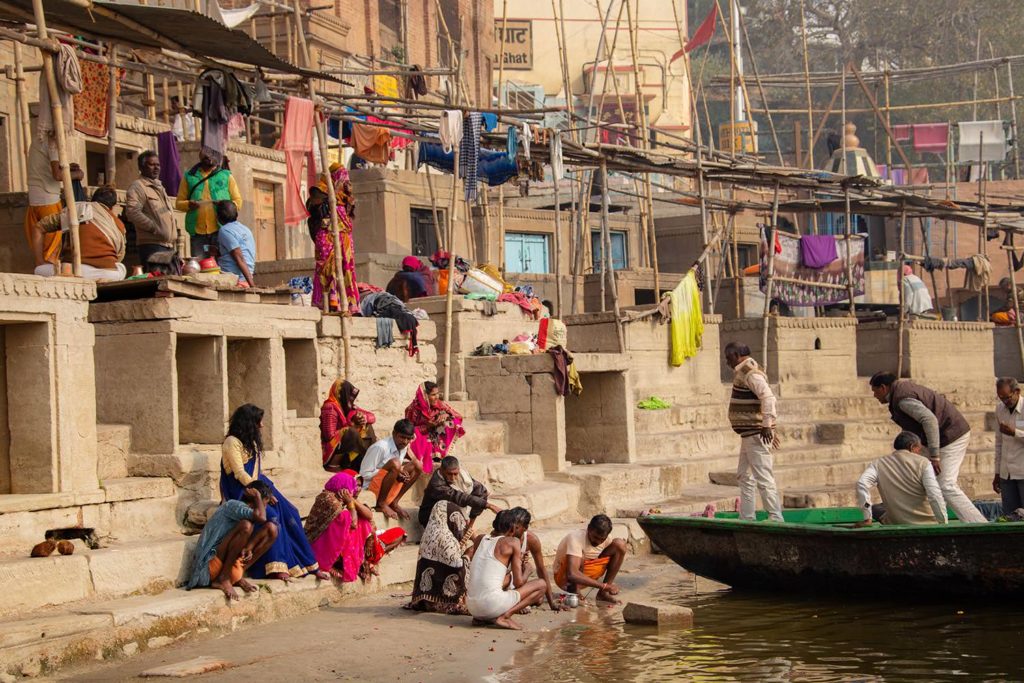 Yes, in many aspects Varanasi can be poor, dirty and can smell quite bad, but for a passionate photographer, it’s part of the whole picture. I was never the same again after the first trip to Varanasi. This is what travelling around the world probably felt Like 70 years ago when each country had a strong and unique identity and so much was still to discover. There were no budget airlines and social media didn’t make it so casual to come and spend a weekend mostly dedicated to Instagram selfie. 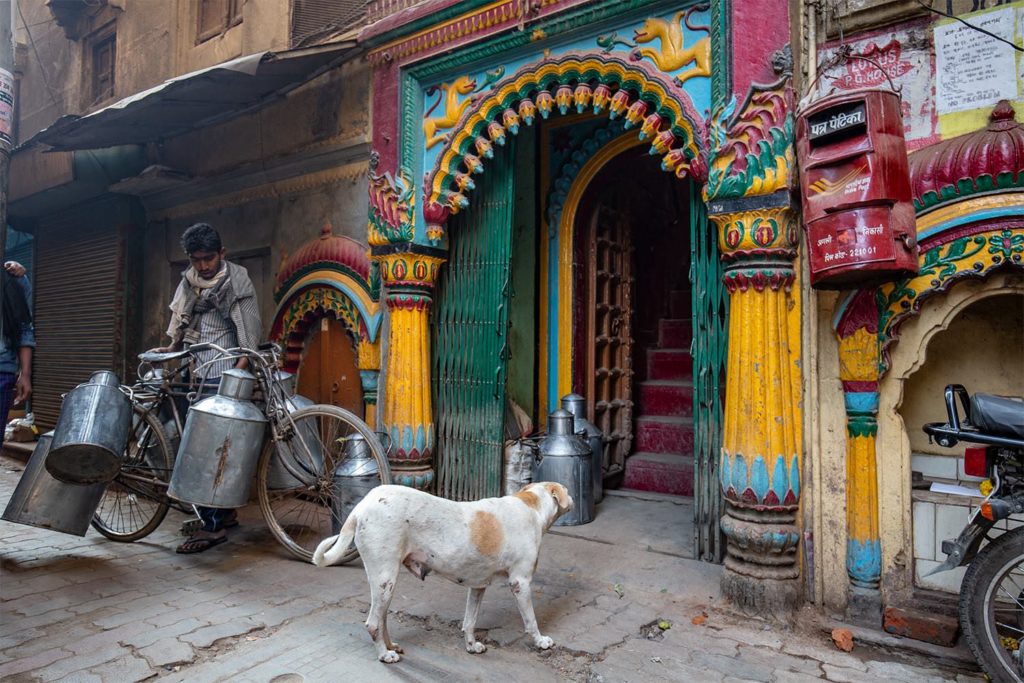 Every single walk around Varanasi is a visual explosion. Small streets, people going on with their business, no matter how tiny, kaleidoscopes of colours and rays of light create spectacular photos opportunities everywhere you look. In India, most advertisings are hand-painted on old walls, and the Indian convoluted alphabet added an exotic touch. 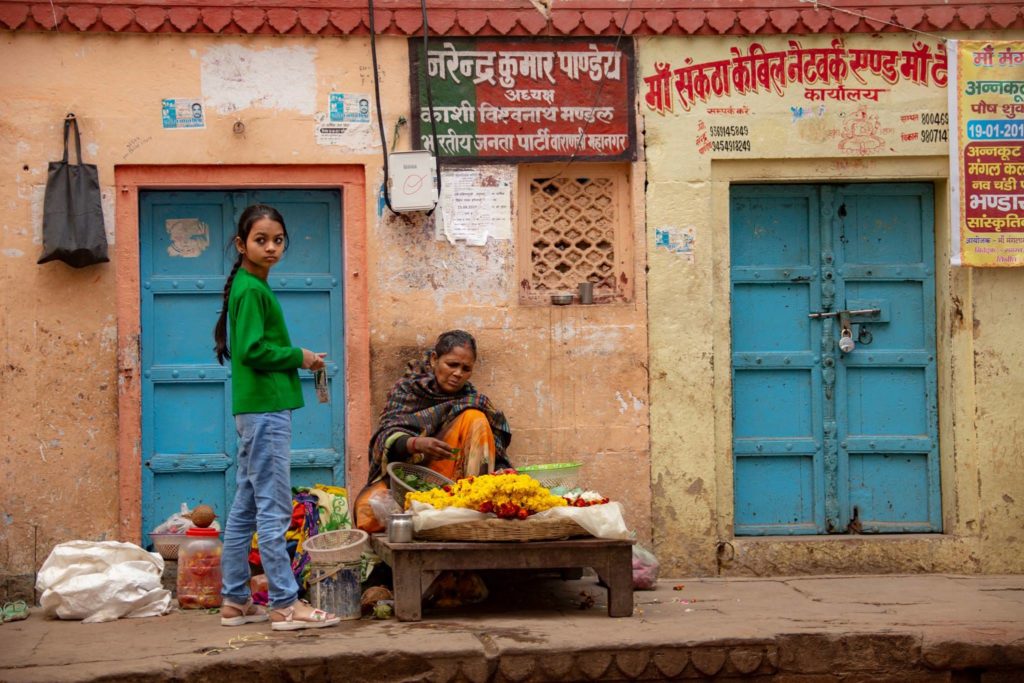 The streets are narrow and convoluted, full of life and stairs cases. As you walk along the Ganges River, you witness people going on their daily life, most of them running a simple business in a meter square shop. People sell food and veggies, tea and cakes, clothing, wood for cremations and flower garlands as offerings, give a haircut or tell your good fortune. All are sitting all day and every day on the same tiny spot.

The Ghats of Varanasi

Ghats are those wide staircases that give access to the river, and they are definitely the most beautiful part of town. For a foreigner, it is simply beyond our imagination. How can you wash your clothes and bathe in the same brown waters where the ashes of dead people just got scattered? You even see people rinsing their mouth with that water! 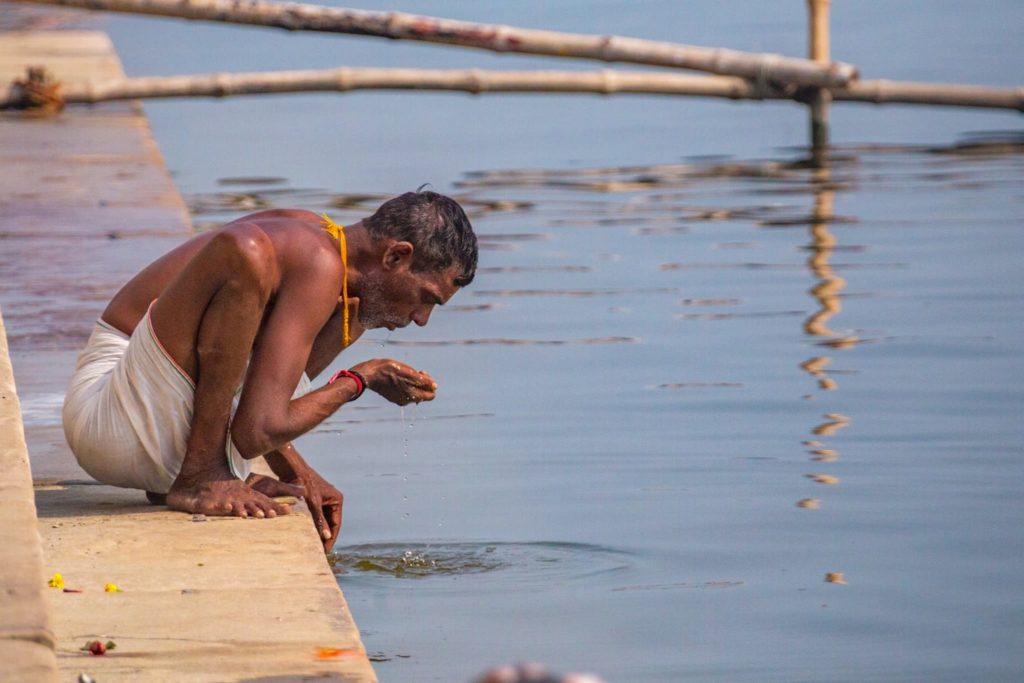 In each Ghat, amazing old stone castles proudly stand high above the river. Each castle has a unique intricated architecture, and all are run-down, which adds a mysterious and fantastic soul that makes Varanasi such a timeless jewel. Renovated architecture often washes away the soul and the history of historical buildings, but Varanasi hasn’t yet made this mistake. All along the river, are dozens if fantastic and half-abandoned palaces. You even can walk inside and casually explore! I entered deserted castles, and no one paid attention to me. 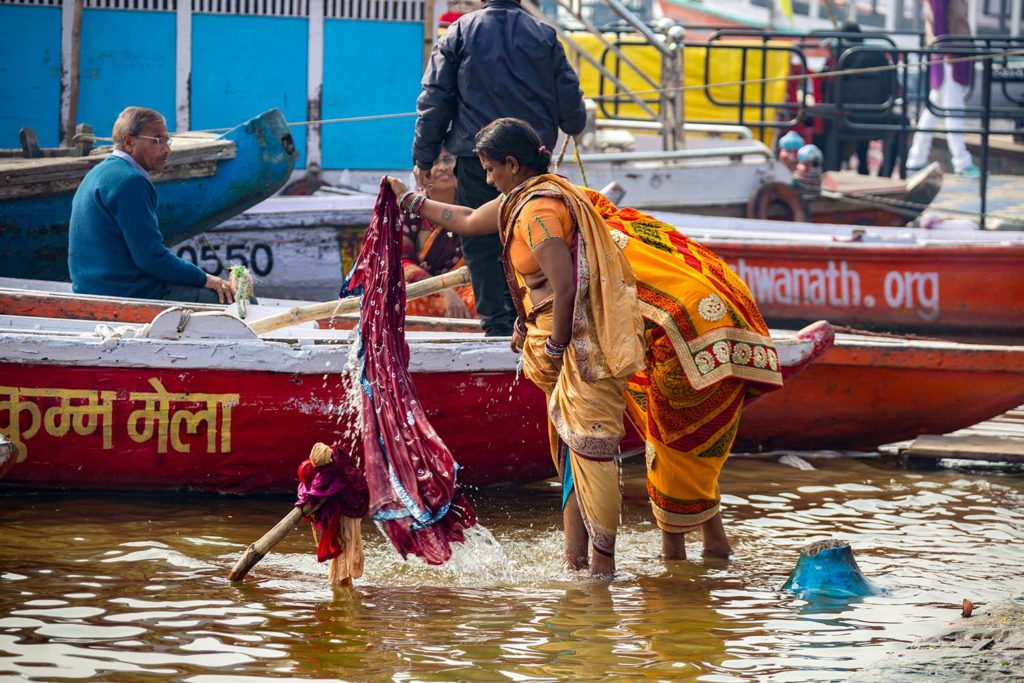 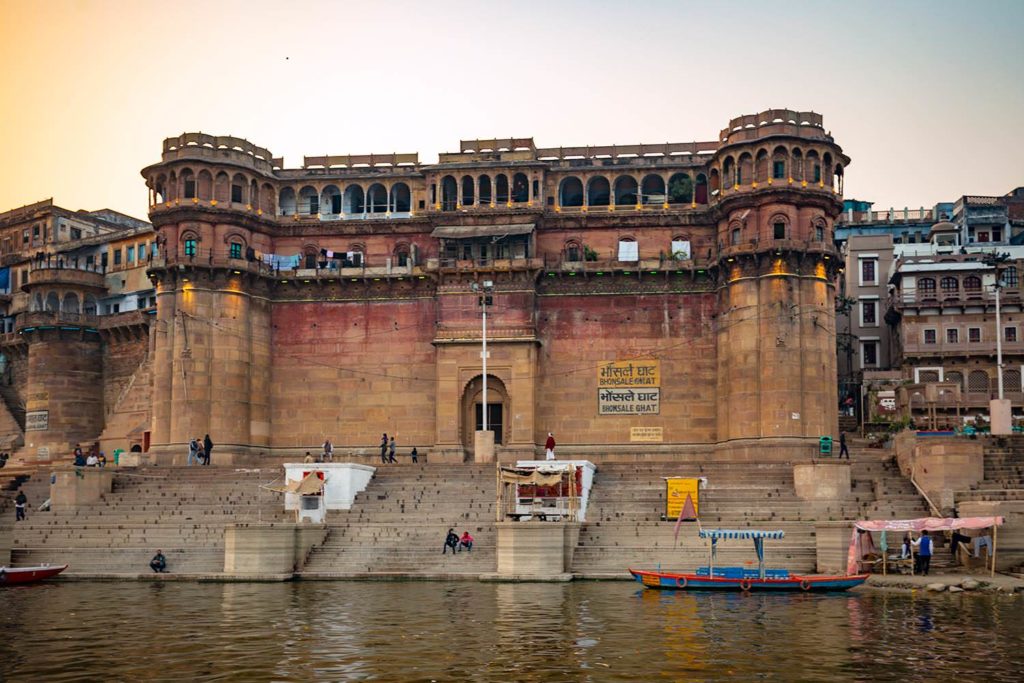 I discovered hidden temples, empty residences and could enjoy the jaw-dropping panorama from the very top. I visited Dharara Masjid, an immense old mosque by the river, and I was the only person in this majestic place. The keeper kindly invited me to climb a long and narrow hidden staircase to the rooftop for a very small fee. The bird view from up there was superb, displaying a historical intricate maze and a prime view on the other side of the Ganges where people go and die. 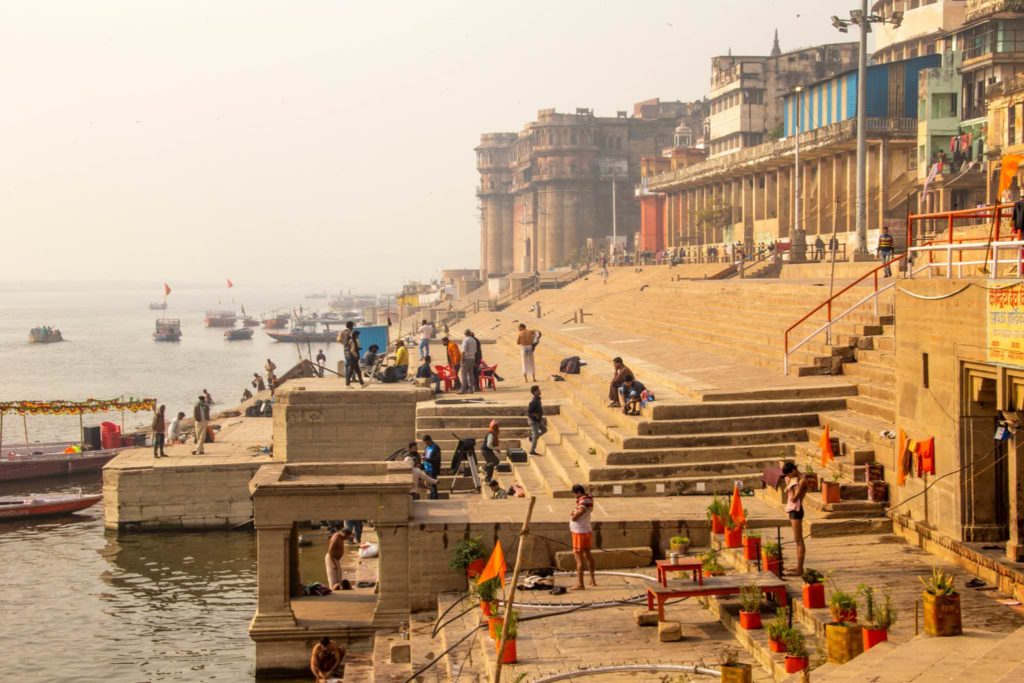 The most magical way to admire those castles is by riding a boat along the river, starting at sunset time from Raj Ghat, all the way to Dashashwamedh Ghat where the Ganga Aarti ceremony happens every night. As the light declined and the red sky reflects on the foggy waters of Varanasi, it feels like travelling in time, or inside a fantastic dream. It feels like being a traveller approaching a new mysterious city in the first Game of Thrones when there still was some mystery to it.

And of course, there are two places every visitor wants to witness along the Ghats. The cremation of dead bodies by the Ganges river, and the Ganga Aarti ceremonies that occurs every night on several spots along the water.

The Pyres of Varanasi

The cremation of dead bodies on the pyres of Varanasi is an ongoing ceremony, and the Hindu believe that ashes must be spread in the Ganges. You can watch the ceremonies, but you are not allowed to take photos. However, there will always be a local offering you to take those photos for a small fee. India is a world of small business opportunities, and no business is too small. 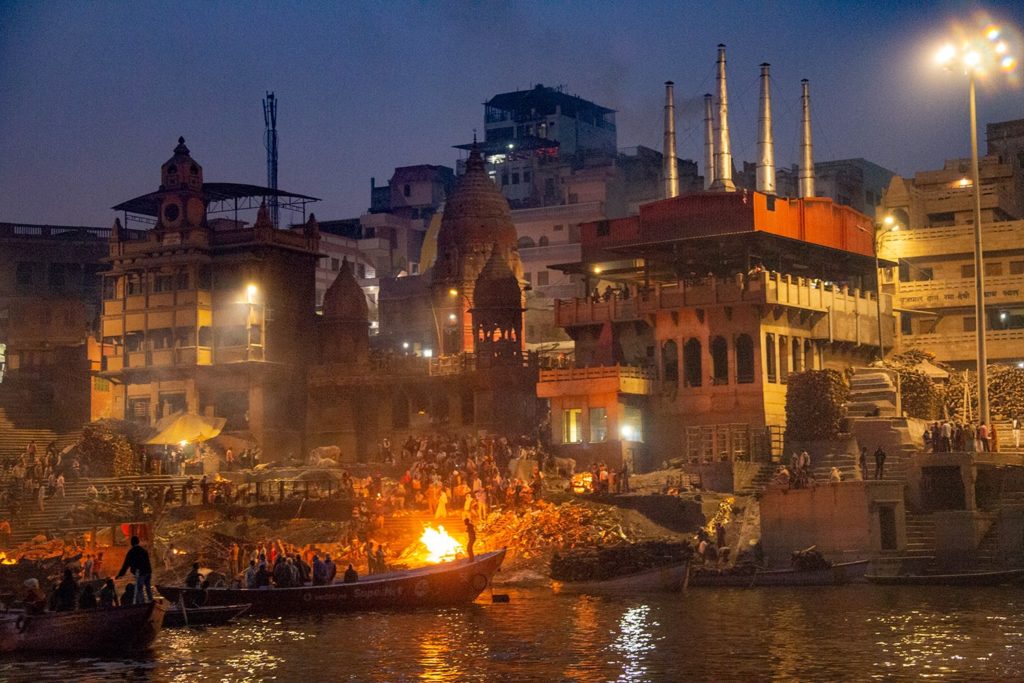 I try to respect the local traditions, so I didn’t even consider taking close up photos. A burning body is not a pleasing sight. Watch it for what it is, because it is indeed an essential moment in their journey, and the memory of the moment is enough. 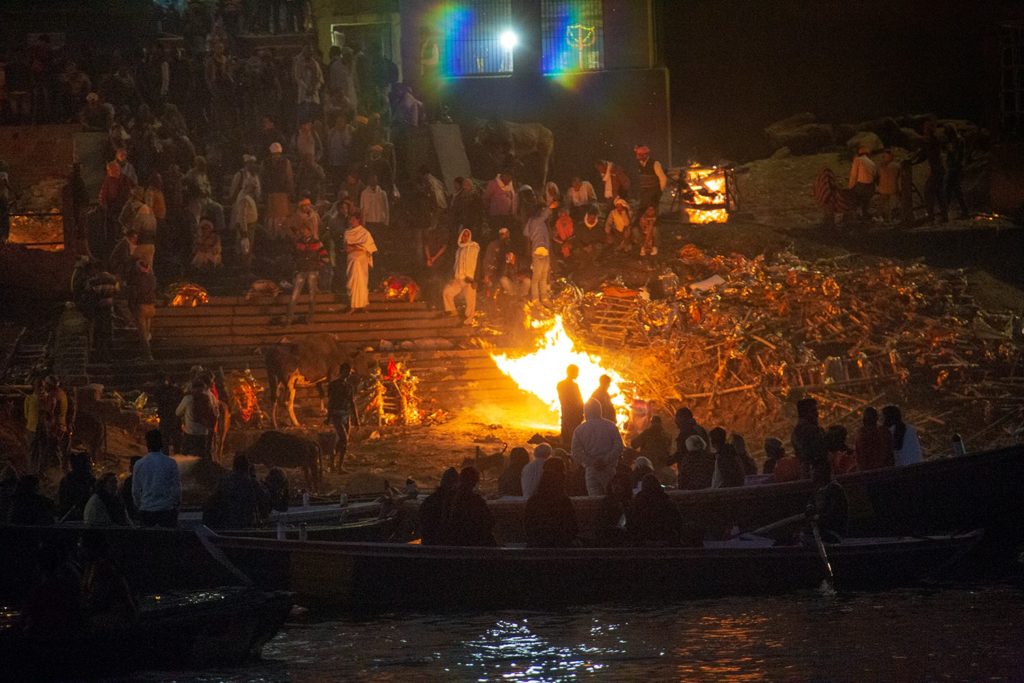 Ganga Aarti is a beautiful 45 minutes ceremonial held at dawn, an offering to show humility and gratitude to the River Goddess. You can witness them at several Ghats, and take photos is no problem. Dashashwamedh Ghat is the most popular staircase, where river cruise boats will stop to allow you to watch a ceremony. 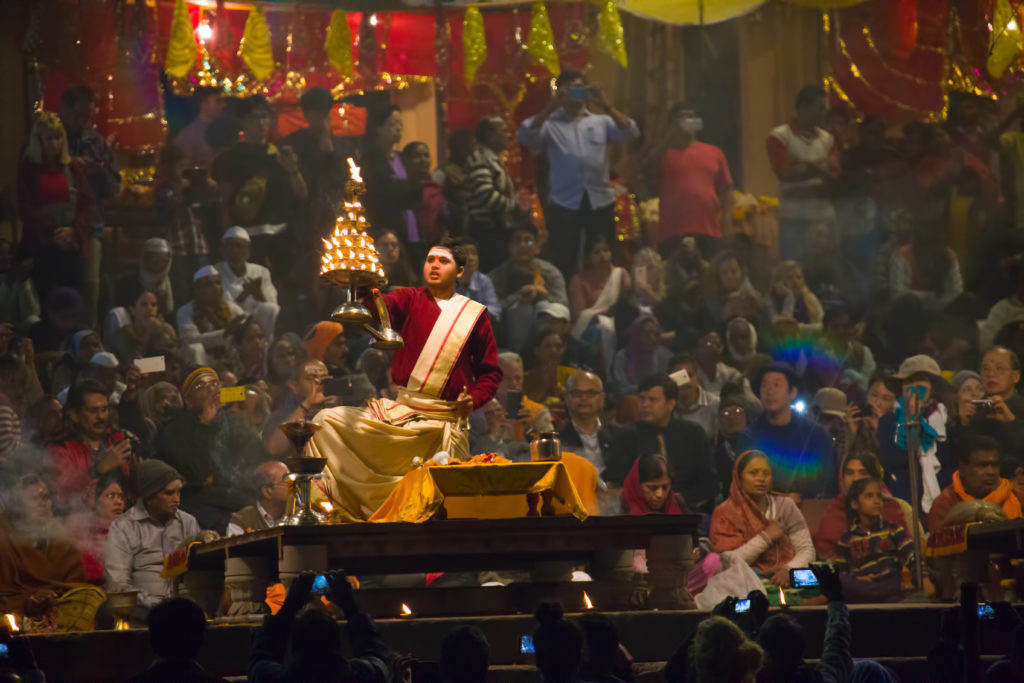 It’ s easy-going and you can walk around and even close to the priests to take beautiful pictures. It could appear a bit of a tourist attraction. Still, tourists are not many in Varanasi, and the place is packed with Indians coming from all over the country.

I also enjoyed travelling further down the Ganges to visit the Vyasa Kasi Temple and Ramnagar Fort. It’s a beautiful and museum inside, but as usual, I prefered to wander further, where no tourists go and to my surprise discover the jaw-dropping ramparts of the castle. This was really a Game of Thrones sight. High walls with round towers, abandoned wide staircases leading to massive doors, once glorious. 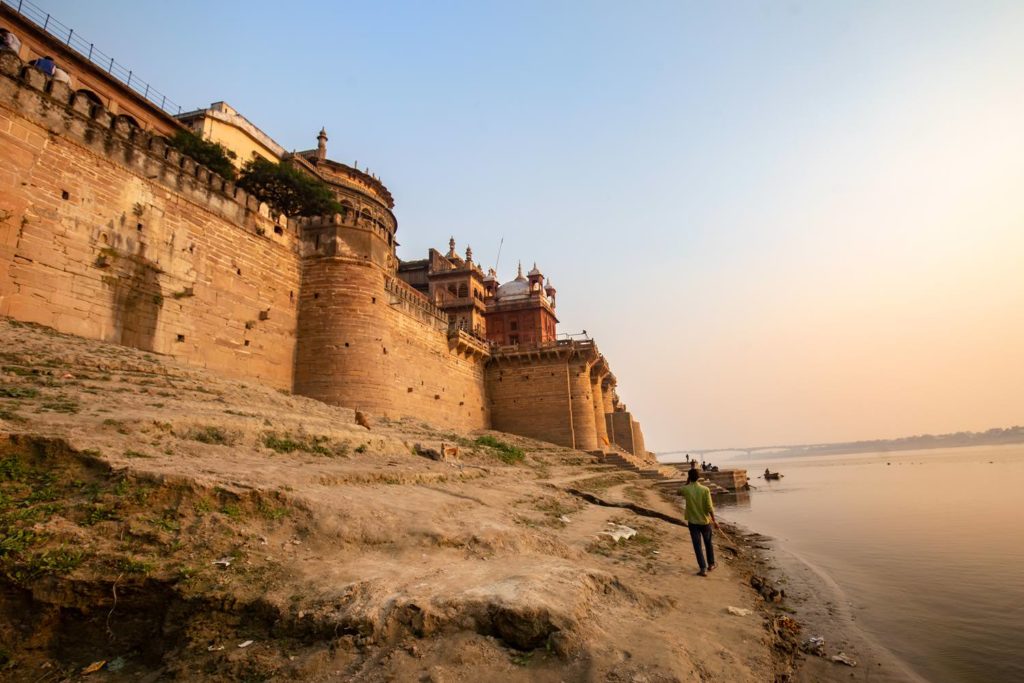 Everywhere in Varanasi is a trigger for imaginative minds. How was the city when rich people could build and run such palaces? I’ve been to Varanasi twice and I am planning another trip soon, staying at a small luxury hotel by the river where I often stop for a coffee. I know that I will walk the same streets and yet, I will still discover wonders missed on previous explorations.

I visited several cities of India, New Dehli and Agra, and my feelings were very mixed. I think if my first trip was in New Dehli, it probably would have ended here. Unlike Varanasi, New Dehli and Agra lacked magic. It certainly has a lot of historical landmarks and fantastic points of interest, but it felt a bit too influenced by colonisation. Anyway, India is a huge country and we’ll keep exploring.