What is your first vision when you think of Patong Beach? Don’t tell us; we know what you are picturing. Let us show you a small enclave never seen by most people, right under the southern bridge leading to the Amari Phuket Resort (and Tri Trang Beach further).

Few would stop out of curiosity; it is a nice sight from the top of the bridge, but how many would walk down the steep stairs to see a small fisherman village still active in the middle of an overgrown tourist town.

I have a special relationship with this village. There used to be a tiny french restaurant in the nineties, and I might even have designed their logo at the time. There were not many french restaurants anywhere anyway. Then in 2004, the tsunami wiped out the entire place in a minute… all gone! Few days after the tsunami, I visited the place and met a couple of ladies, Maria and Fatima, sitting on what was left of their house and wondering what they would do now. I posted their photo on my photo gallery (see below), dedicated to the amazing human spirit in rebuilding their lives. Soon after, Peter, a man from Belgium, came with a large donation given by the population of his hometown and offered it to these ladies. I documented it; it was very emotional. Then time passed, and we lost contact, as it often happens when life returns to normal.

I decided to revisit this area, it was not the first time I took photos here, but this time I really wanted to capture what life was like in such an unusual place. So I walked in the heat for more than an hour when I heard my name… and here they were, both ladies waving at me with smiles and tears… time passes, but people don’t forget these times. She now has a tiny noodle soup restaurant, and of course, I had to try. It was simple, very local and tasted especially good.

The village is sheltering fishers and tourists longtail boats. When the sea is a bit rough at this time of the year, most boats are parked here, but these boats all stay along the south end of the Patong beach during the high season. It is a huge contrast to walking along this poor riverbank after driving along with the Starbucks, fancy shops and shopping centres of Patong. People, young and old smiled and greeted me, kids waved, asking me to take their photos. Don’t get fooled by the photos, though; it’s a bit dirty, it’s a bit smelly, but it’s real, and I had a great time wandering along the river, asking: ‘Am I really in Patong?’ 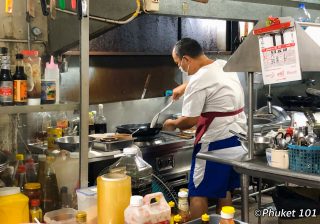 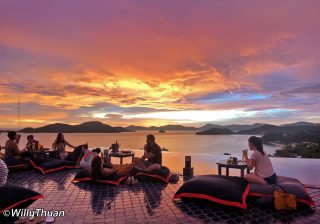