What to do in Panwa Beach?

Panwa Beach, also known as Khao Kat Beach, is not a great swimming beach and yet has the charm of these remote bays not many would take the time to explore while visiting Phuket. Located on the east coast cape but facing west, the whole area is peppered with luxury villas and few resorts, a great alternative to relax away from west coast crowded spots.

Where to eat in Panwa Beach?

So if you are after peace, this is an enjoyable region to spend a slow afternoon staring at nearby islands. Then, have lunch or drinks at one of the bamboo and thatched roofs restaurants available along the strand, such as the good old ‘The Beach Bar‘. You can even stay at one of the beautiful resorts around, the most popular being Andacura Beachfront collextion Panwa Phuket (formerly Novotel Panwa), and enjoy a great morning stroll along the sandy bay all the way to the few fishing boats at the southern end.

The Beach Bar Phuket is a local restaurant half-hidden on Panwa beach, away from most tourist crowds. Once a modest wooden shack, the restaurant grew in popularity and now displays a long row of tables and plastic chairs. Set on the east coast of Phuket, this fun restaurant is still mostly made of wood pillars with a thatched roof placed on the beach.

For a more sophisticated lunch or dinner (but still casual), drive a kilometre further down the coast and stop at the excellent The Cove and enjoy a surprisingly great menu while sitting at tables by the sea!

Panwa House is a white Sino Portuguese restaurant surrounded by palm trees, right on the secluded beach of the Cape Panwa Hotel on the east coast of Phuket. This house has been a Phuket icon for years, even appearing in movies or TV series.

The quality of the meat, the cool equipment used to cook and smoke it to perfection, and the chef’s skills make this a treat. Probably one of the best steak experience on the island.

What to see and do

Panwa beach and its surroundings are not your usual tropical holiday destination, but once you drive there on a nice day, you will see a side of Phuket island that not many take the time to enjoy.

There are actually more than two beaches in the Panwa area. The one most people call Panwa Beach is in fact Khao Kad Beach. The seabed is covered with dead coral so it is not a great beach for swimming. Further south, The Cape Panwa Beach is a lot nicer and many people don’t even know it exists because the beach access is reserved to the guests of the Cape Panwa Hotel only.

There is not so much to do on Panwa but enjoy the tranquillity of such a unique hidden spot. You can sit down at a beach table and enjoy your reading, order drinks, food and some excellent tropical fruits. Then you can have a beach massage at one of the bamboo huts! This is pretty unique as it is tranquil and feel like Phuket twenty years ago!

Ao Yon is a small hidden cove where you can swim all year round. It now has a few restaurants and a few small beach clubs.

Khao Kat Views Tower or ‘Panwa Viewpoint’ (or ) offers an amazing 360˙ view on the southeast part of Phuket and the islands around. It’s very isolated and despite some investments done to attract tourists, it may be too remote to ever become popular.

Go further south and stop for a short visit to the Phuket Aquarium and its small glass tunnel. This aquarium may not be as big as the new Aquaria at Central Floresta Phuket, but this is a Phuket Marine Biological Center dedicated to rescuing dolphins, dugongs and turtles often found in distress around Phuket.

Baba Nest at Sri Panwa Hotel is the ultimate rooftop bar in Phuket. It is built high above Phuket Aquarium on the remote Cape Panwa, on the southeast of Phuket Island. It’s far, hard to find, hard to book as you can expect a two weeks waiting list to get a reservation, but it’s worth it.

Where to stay on Panwa Beach

There are quite a few hotels and accommodation along Panwa Beaches. The best-known hotels and resort around Panwa are:

Cape Panwa Hotel is a long-established resort with a classic design on a very enviable location and a superb private beach. The hotel has more than 200 rooms and beautiful pool villas, 7 restaurants, including an old Sino-Portuguese house hosting a restaurant by the beach, and a funicular to easily go and down the hillside.

Sri Panwa is one of Phuket most amazing and most exclusive hotels. Everyone we know heard of it, but not many actually stayed there, and we finally did. This resort is built on the remote Cape Panwa hillside and is best known for its incredible rooftop bar called Baba Nest.

Pullman Phuket Panwa Beach Resort is a vast hotel with 211 rooms, including 29 Villas with private pools, on its own vast but non-swimmable beach.

How to get to Panwa Beach?

Panwa beach is a little difficult to find for three reasons. First, the name can be confusing as it is occasionally called Khao Kad Beach. Second, there is another beach nearby called Panwa Beach, but it is a private beach reserved for the exclusive use of the Cape Panwa Hotel, and third, while the beach is long, the public access is a little tricky to find.

The Cove Phuket – A Hidden Gem on Ao Yon Beach 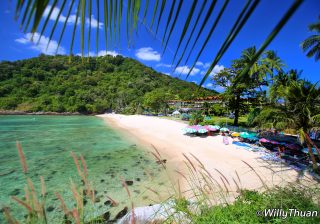 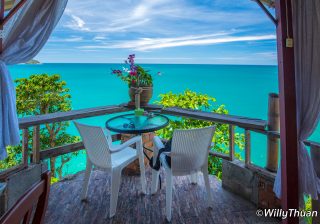 The Cove Phuket – A Hidden Gem on Ao Yon Beach

Phuket Beaches There are no less than 44 Phuket Beaches now on our list! A few are crowded, many are quiet, some are hidden, and some are still secret. However, there are many beautiful beaches where you can walk alone for kilo

14 Most Instagrammable Locations in Phuket

17 Most Hidden, Secret and Quiet Beaches of Phuket