Here are just a few photos I took on the day the tsunami hit Phuket December 26, 2004, and the weeks that followed. So they won’t vanish from my memory. It’s not a dark memory, and it’s proof of the human capacity for survival and natural optimism and this event shouldn’t be forgotten.

I was living in Patong Beach at the time, and luckily we were not on the beach that day. The first sign was only a mild earthquake, so we didn’t really worry. I was supposed to go photoshoot on that beach, but I was feeling lazy and decided to go later.

When people started to run up the street in front of our house, we suddenly knew something was going on, but it’s hard to imagine the scale of what was happening. It really started to get serious when we saw people with mud and blood on their body and faces, shouting ‘water is coming, run to the hills’!

We jumped in our car and reached high grounds. We stayed there for most of for a day, looking down on Patong bay and the incredible scale of the receding waters. From up there you could not really see much damage. We knew it was extensive but it only took its full dimension the next day, when I walked the devastated streets of Patong. Nothing can prepare you to this.

For several days Phuket was a devastated and traumatised island and the first priority was to recover the injured and the bodies. Something no one should have to experience, ever, and I won’t write about this part as it was the hardest. Like everyone on that day, I wish it never happened, but it did.

Sooner than you would expect, people started to clean, mostly not knowing what to really do with the scale of the devastation. It seemed that people wanted to do something to move on, anything. I remember digging the sand for hours with a friend, trying to pull out some piece of garbage. I felt pretty useless, but we had to do something… anything. I told myself there must be something better we can do to help the island and its people.

So without really thinking about it, during the following weeks, I started to document the reconstruction of the island and share it with the world. Fox News was showing the devastation; I was sharing the rebuilding. My photos were my contribution to the revival, and I want to believe that it did count for something. It was the opposite of dark documentation. What I was witnessing was unexpected, I saw how great human spirit could be: In extreme situations, ordinary people can do extraordinary things.

Living in Patong, I was in the middle of it, but thankfully just far enough from where the water stopped. And like everyone, we ran to the hills. Seen from up there, no one could apprehend the span of the event, and only the following days we all started to assimilate the sheer size of the devastation. I’m not going to go through it, everyone knows, and millions of photos did prove it. News and reporters were always looking for the devastated areas to stand in front of, and everyone was mad at them for that. When I thought of it years after, we could say that maybe in an unexpected way, they did their part and moved the world.

I chose another path: I walked through the ruins and the wrecks every single day, and wherever I saw life coming back, I shared on my photoblog. Comments of supports were flowing to such extent that I was busy night and day posting each of them on my site. The more I posted, the more I received, until one day a French TV crew knocked on my door and asked to follow me for a few days. I said yes, it’s hard to refuse such honour, but soon I realised that I didn’t like the idea of doing this. Nothing was wrong; they were nice guys. It was just ‘not me’. I never saw that documentary.

So here are some of the images that meant something to me. They might not all be striking nor even impressive, but each comes with a story, a memory and a lot of emotions. Six years later, when I walked on the beach, local people still called me and greeted me like a “long-time-no-see” friend. It can really be overwhelming. 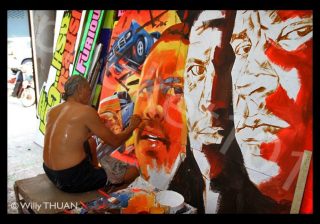 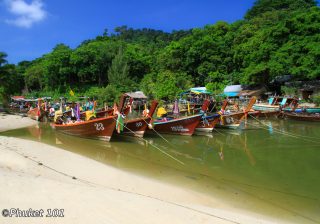