Paradise complex in Patong Beach has been the heart of the Phuket Gay party zone for more than twenty years. I don’t know if the fancy name had any influence on the choice of location, but it’s really easy to find, right at the foot of the ‘Paradise Hotel’ a 24-floor tower erected in the middle of it like a lighthouse, well you get the picture.

It is a fun and easy going area and you don’t even have to be gay to enjoy it. All year round when night comes, bars open their doors on each side of the main street and some have a small but entertaining cabaret show. Other venues just feature a stage where boys would flex some muscles, well, the ones who have, to catch the attention of the guests sitting in sofas around the room. Then the rest is up to them.

Bars names might change quite often, but some have been open forever. ‘My Way‘ the brightest and most eye-catching, has the best ladyboys cabaret show in this area, and occasionally hosts special events. Here you can enjoy a decent little cabaret show for the price of a drink. If you want a full blast Vegas style cabaret show, you’ll have to go to ‘Simon Cabaret‘, but you’ll have to pay an entrance fee of course. Next is the internationally known ‘Boat Bar‘, a gay club with also small cabaret performances. A fun story about the Boat Bar says that girls would go there because all handsome guys are there. Then another story says that straight guys would also go there because the hot girls going for handsome guys eventually find out they are gay, that is where you come up and say: ‘I’m not gay’. I never tried.

‘Connect Bar‘ is very popular, as well as ‘Spartacus‘, ‘James Dean‘ and ‘Orchid Bar‘ where customers like to seat by the street side and watch by passers. ‘The Flying Handbag‘ with its funny name has been there as far as can remember with its colourful collection of handbags. Just walk around the main soi and the back lanes there is plenty for everyone.

Once a year the Phuket Gay Carnival will take place, and for three nights, Paradise complex becomes a little Rio Carnival with lots of lights, plenty of balloons and flags, lots of extravagant shiny costumes, and the ever-popular Katoeys (ladyboys). During those three nights, bars will put on small street performances and contests and the bars will be crowded.

This carnival was originally in Bangkok but was brought to Phuket probably for traffic jam reasons. The Parade going around Patong Beach on the last of the three days can create a serious mess, so remember that if you plan to drive your car along the beach road, it might take two hours to cross Patong. Each gay bar and Phuket Simon Cabaret will work on their best costumes and decorated floats to proudly parade on huge trucks, driving down the beach road. A great occasion for photos as the entire town, gay or not, gets into a party mood. The Parade will end at Paradise Complex where the last wild party will begin.

During the day, a popular gay area is located right at the foot of the huge tsunami tower on the beach, somewhere near ‘La Flora Resort’. It’s easy to spot: there is always a rainbow flag floating and guys will often play volleyball at the end of the day. 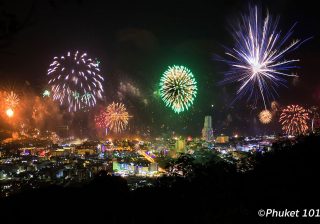 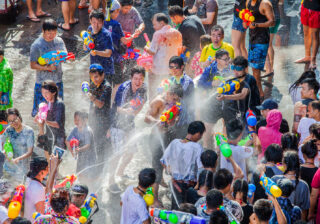 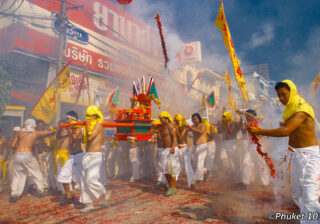